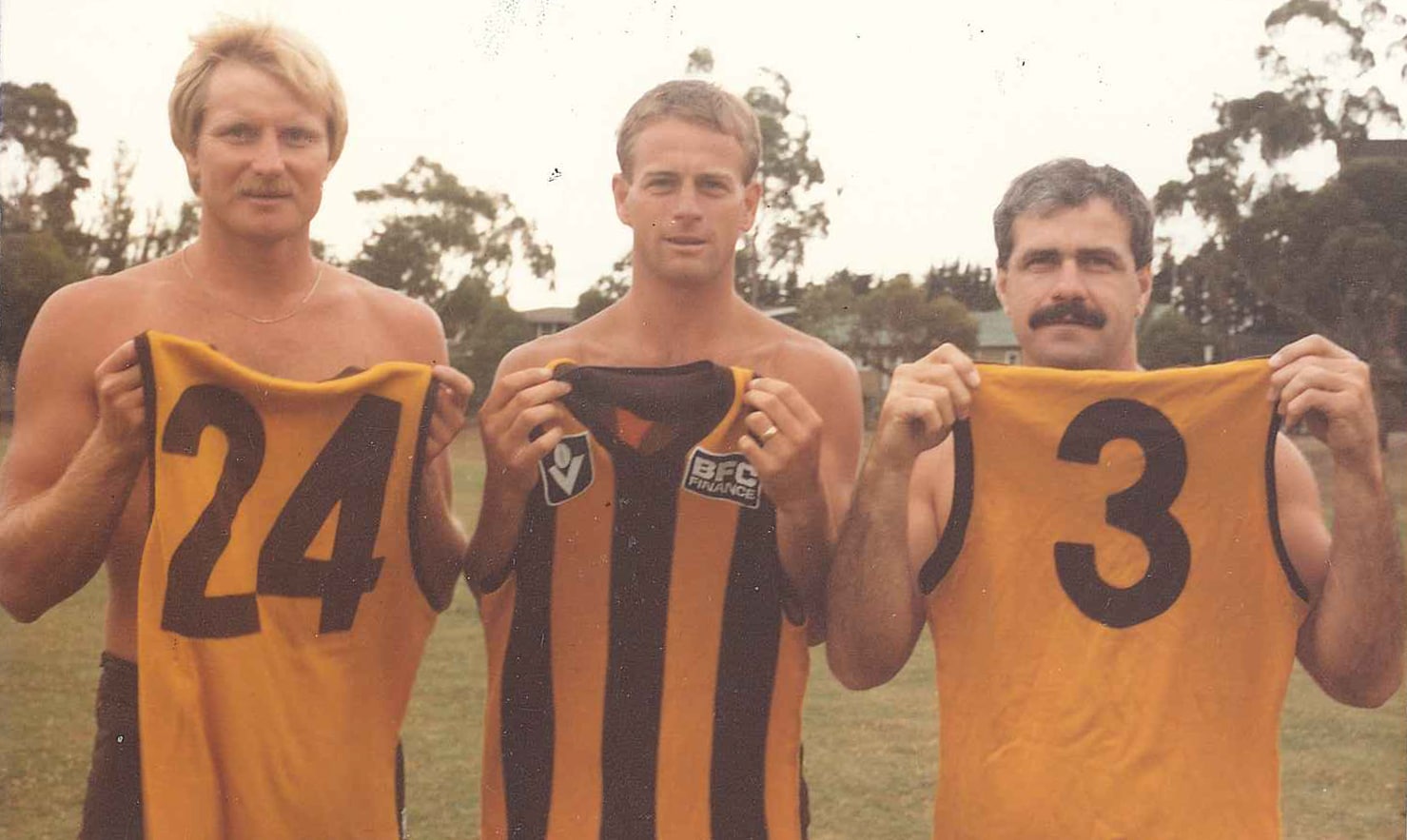 During August 2014, the Herald Sun ran a very interesting competition for footy fans on famous guernsey numbers worn by VFL/AFL players.  It would come as no surprise to Hawk fans that Leigh Matthews number 3 was voted as the most significant.

In 1903, guernsey numbers were used for perhaps the first time in a VFL match. In an attempt to promote the code interstate, the VFL/AFL scheduled a Round 4 game between reigning premiers Collingwood and Fitzroy at the SCG. To help the novice spectators, the VFL/AFL allocated numbers to each player and distributed double-sided cards with player lists and rules to the 18,000 spectators as they came through the turnstiles.

The following season VFA club Port Melbourne permanently introduced guernsey numbers. While Melbourne in the VFL sought to follow suit in 1905 only to meet resistance from the players.

In 1912 the VFL/AFL mandated that all players had to wear guernsey numbers. Not only that, but the VFL/AFL also instructed the clubs what size and colours those numbers had to be. In that same season the Football Record was born, and players numbers were used to help with the policing of rules and the reporting of foul play.

For the supporter, the guernsey numbers made it easier for the fans to identified who their favourite player maybe thus the cult heroes of the day were to emerge. Over time some numbers became more significant than others, given the ongoing lineage of players wearing these numbers. 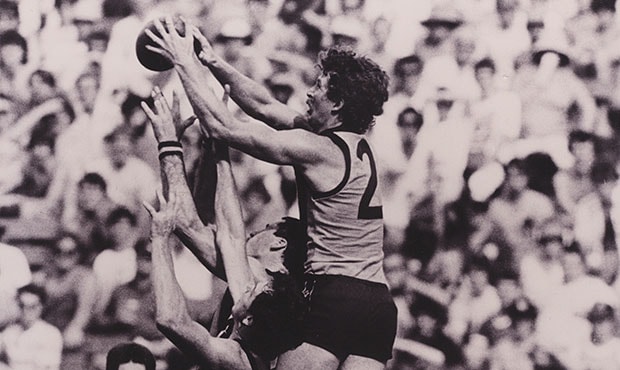 Jonathan Hay (1997- 2005, Games 149) a somewhat cult figure with the fans, played many outstanding games at fullback, a member of the 1999 Night Premiership. Number 5 is considered one of the spiritual numbers of the Brown ‘n Gold given the legacy of Peter Crimmins.

Peter Crimmins (1966-1975, Games 176) who more than many, epitomised Hawthorn. He was an outstanding and courageous rover who played a sterling game in the 1971 Premiership. Named Captain, 1974-1975.  He unfortunately died far too young, a few days after the 1976 Premiership, now known as Crimmo’s Cup. As a mark of respect his guernsey was retired from 1977 till 1992 when the Cimmins family made the offer to Andy Collins would he like to wear the number 5 in 1993. Inducted into the Hall of Fame in 2009.

Andy Collins (1987-1996, Games 212), a dedicated and determined player, holds the record for consecutive games for the Hawks, 189.  Played vital roles in three premierships, 1988 (wore 40), 1989 and 1991 (wore 4). He won the Club Champion in 1990.  In 1993 the Crimmins family asked could their father’s number 5 be brought out of retirement and be offered to Andy Collins to wear as his blonde hair and style of play reminded them of their father.  Andy Collins was delighted to accept, Crimmins was his childhood hero.

Daniel Harford (1995-3003, Games 153), a real live wire was the next to wear the famous number 5, a creative on-baller he played in the 1999 Night Premiership. A great clubman, his chat show ‘Harf’s Half Hour’ on a Thurday night in the Social Club still run’s today under the title ‘Talk Sport with Mort’. 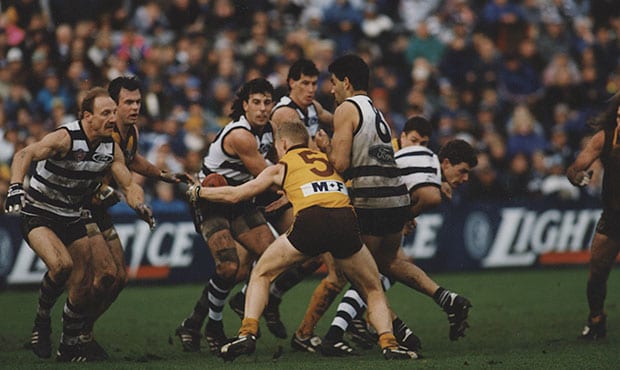 Andrew Collins and a litter of Cats.

Col Austen (1940-41, 1943, 1946-49, Games 85) the war years robbed him of more football success. He was a brilliant defender who always attacked the ball with great determination.  In his final year he tied for the Brownlow with South Melbourne’s Ron Clegg but was awarded the Brownlow retrospectively in 1989.  Named in the Team of the Century, 2001.

Brendan Edwards (1956-61, 1963, Games 109) achieved Hawthorn immortally by being named ‘best on ground’ in the 1961 Grand Final with his 30 plus disposals. Introduced the famed Kennedy Commandos style training, laying the foundations for the 1971 premiership.
Named in the Team of the Century, 2001, Inducted into the Hall of Fame 2011.

Shaun Burgoyne (2010- on, Games 138), popular current star known to all as Silk. A very creative player with great anticipation, responsible for many attacking moves from defence. Has played in three premierships, 2013, 2014, 2015.

Ted Pool (1926-1938, Games 200) was recruited from Kalgoolie WA.  He was an outstanding rover, the first player at Hawthorn to register 200 games, represented Victoria seven times. Inducted into the Hall of Fame in 2005.

Jack Cunningham (1961-1963, Games 17) played in the Club’s first Premiership in 1961, he kicked the goal that put the Hawks in front for the first time after the half time break.

Allan Goad (1972-1982, Games 138) A very serviceable player in the Hawthorn style, played as a second rover in the 1976 Premiership and unfortunately missed the 1978 premiership through injury. A renowned Clubman.

Ben Dixon (1997-2007, Games 283), a mid-sized forward and foil to the bigger Hawk forwards, his long kicking and willingness for the contest made him a key component. Played a prominent role in the 1999 night premiership.

Jack Gunston (2012-now, Games 89) current star, a key member of the potent forward line of the now famous 3-peat. Displays great stamina and endurance, able to run all day, an accurate kick on goal. Has played in three premierships, 2013, 2014, 2015. 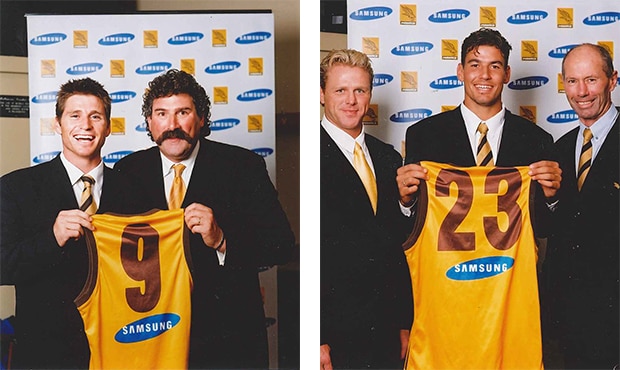 Players who have worn this number are known for their independent and flamboyant spirit.

Ted Fletcher – (1944-1954, Games 129) gave inspiring service as a strong marking ruckman. He vigorously protected the smaller men in his team and won the Best & Fairest in 1953. Named Captain 1953-1954. In later years he was very proud to announce that those who wore the number 23 after him all had an independent spirit with a touch of the rebel arrogance and that he was proud that he started that legacy.

Don Scott (1967-1982, Games 302) one of the most feared ruckman of his era, a fierce competitor who used his weight and aggression at the ball to great advantage. Played in three premierships, his speech at three quarter break inspired the 1971 victory against the Saints. As captain lead the team to the 1976 and 1978 premierships. The first Hawk to play 300 games, he won the Best & Fairest in 1973. Named in the Team of the Century, 2001, Inducted into the Hall of Fame, 2003.

Lance Franklin (2005-2012, Games 182) capable of breathtaking efforts with his inspirational play on the forward line. A real popular cult figure, he captured the imagination of the football public being hailed a superstar. Had a brilliant season in 2008, topping the AFL goal kicking, being part of premiership team that broke a 17-year drought, won the Crimmins Medal and was selected in the All-Australian team.

Allan Woodley (1954-59,1963, Games 130) A big tall follower who made a big impression in his first year. Missed four seasons including the 1961 Premiership due to studies in England.  Made a successful comeback at the age of 28 as number one ruckman in the losing Grand Final in 1963.  Won the Best & Fairest in 1959.

Trent Croad (1998-2001, 2004-08, Games 184) Experienced a career with a two year break in the middle when he was traded to Fremantle. Upon his returned developed into a very capable and attacking centre half-back. He was a member of the 2008 Premiership team and broke his foot during the game, unfortunately he never played again. Roy Simmonds (1950-1961, Played 192 games) A real cult figure, a terrific clubman who was famed within the confides of Glenferrie for his sociable nature. Versatile and courageous, he was particularly strong, very effective as a rover, centre man or the back pocket. Won the Best and Fairest 1956, Named in the Team of the Century, 2001 and Inducted into the Hall of Fame, 2013.

David Parkin (1961-1974, Games 211) an extremely dedicated footballer who embraced the Hawthorn work ethic. Reliability and courage were his trademarks.  Named Captain, 1969-1973, he played many fine games from the back pocket. Captained the 1971 Premiership team, won the Best and Fairest in 1965 and was named a Club Legend in 2013.

Alle de Wolde (1975-1982, Games 97) A reliable back pocket specialist with a reputation of a valued clubman with his co-operative manner, always team first.  Played in the 1978 Premiership team.

John Barker (1998-2006, Games 113) became a real cult figure with the Hawks fans, with his own personal cheer squad, the John Barker Wing with banners prominently displayed at all venues. Initially a key back-man but developed into a strong marking forward when asked to replace the injured Nick Holland. His two long match-winning goals will live forever in the memory Hawk fans who witnessed his two goals against Port Adelaide in the 2001 Semi Final.

Stephen Gilham (2006-2012, Games 98) followed coach Alastair Clarkson from Port Adelaide becoming a regular in defence where his reach and athleticism equipped him for a variety of roles.  In 2008 he temporarily lost his place in the side but a pickup in form enabled him to regain his place and ultimately the Premiership.

Matt Spangher (2013-on, Games 23) was picked by Hawthorn as insurance for tall forwards defenders. Became a cult figure with the fans with his dark flowing hair and enthusiasm for the contest. Struck form mid 2014 and played a valued role in the 2014 Premiership team. 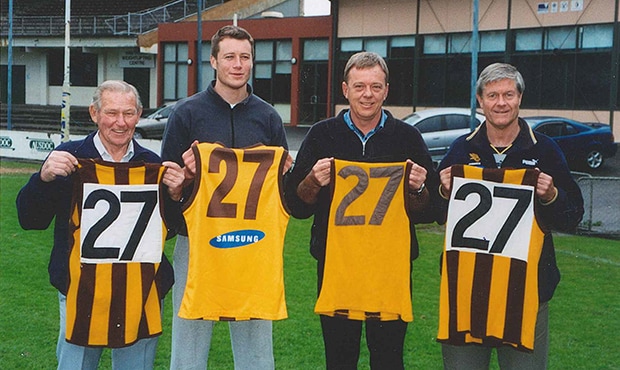 A record of the guernsey numbers and the players who have worn them.

Please note: If you are having trouble opening the excel spreadsheet, try another web browser such as Chrome.