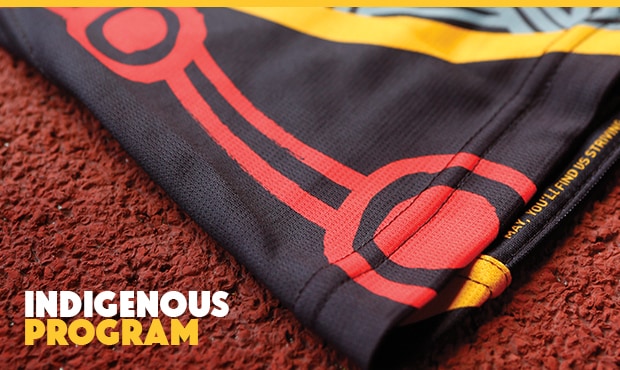 Hawthorn Football Club is proud of the partnership with the Epic Good Foundation and is truly grateful for the opportunities offered as part of the Hawthorn Indigenous Program.

All of Hawthorn’s Indigenous Programs are made possible with the wonderful support of the Epic Good Foundation.

The Big River Hawks is an under 18 football team based in Katherine, Northern Territory who compete in the Darwin-based NTFL. Established in 2010, the Big River Hawks aim to increase Indigenous participation in study or work, using team selection as a reward.

Being part of the Big River Hawks provides motivation to further develop their own skills on and off the field. Hawthorn Football Club recognises the hard work players put in with the Big River Hawks and proudly offers various incentives and rewards to encourage their great work.

Each year, Hawthorn Football Club flies 10 players from the Big River Hawks Football Club from Katherine to Melbourne to experience life and football at the home of the Hawks.

With the introduction of the Big River Hawks women’s team in the 2016/2017 season, we were thrilled to include five women’s players as part of the 2017 trip to Melbourne.

For many years, Hawthorn Football Club has engaged with the Katherine community to inspire and engage the community, hosting a large number of events including community camp, football clinics and Next Generation Academy activities. 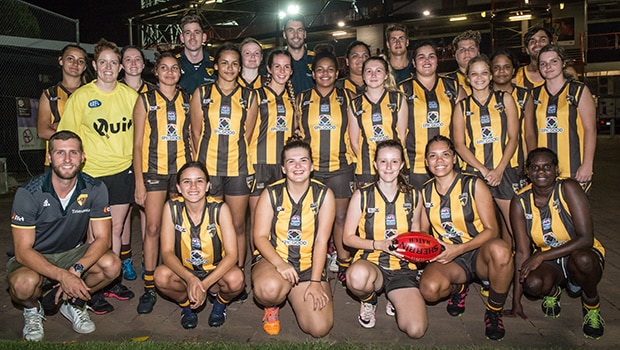 In conjunction with Hawthorn Auskick Centre, Indigenous children from remote communities in the Northern Territory get the opportunity to visit Melbourne and experience the culture and unique programs that Melbourne has to offer.

Together, Hawthorn Football Club and Hawthorn Auskick Centre provide the kids with special experiences so they may strive to better themselves leading to healthier and stronger role models for their community.

Staying with billet families from the Hawthorn Auskick Centre, the kids also attended a day of school at Auburn Primary School along with their billet families.

Auskick exchange participants from Kalkarindji posing for a photo with Clarko and the team. 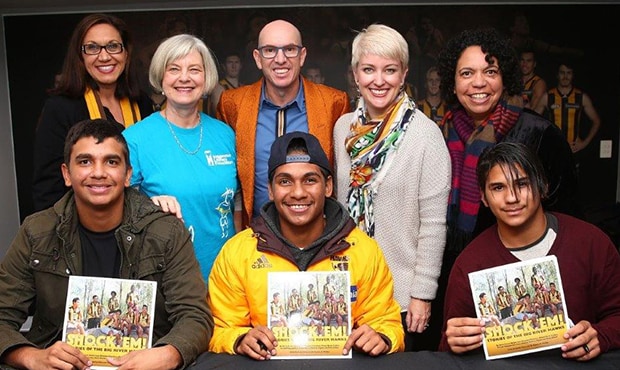 The launch of “Shock ‘Em” written by Big River Hawks players in conjunction with the ILF.

Based at Worawa Aboriginal College in Healesville, Victoria, the Lady Eaglehawks is an under 16 team competing in the Eastern Regions Girls Football League.

Worawa Aboriginal College is a boarding school for Indigenous females from years 7-10 with the participants coming from a range of Indigenous communities from all over Australia.

Through a common love of football, Worawa Aboriginal College has been able to encourage young Indigenous women to commit more time to their education and strive towards achieving their goals in the classroom and on the field. 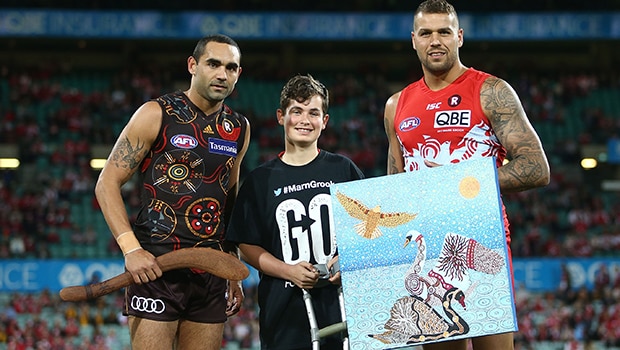 Shaun Burgoyne & Sydney’s Lance Franklin exchanging Indigenous gifts in the Sir Doug Nicholls Round in 2017. The painting on the right was designed by 3 Lady Eaglehawks players.

Worawa Lady Eaglehawks catching up with Cyril Rioli and Alastair Clarkson before their Round 15 NAIDOC Week clash with Collingwood at the MCG. 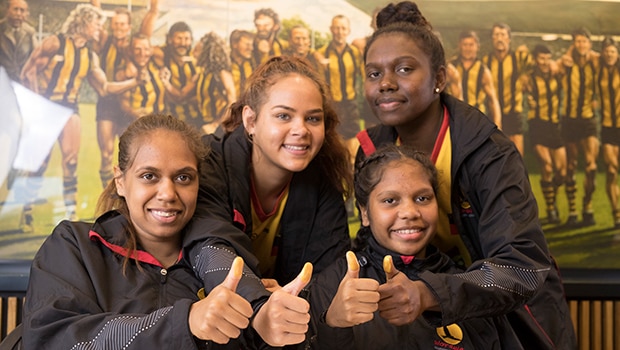 NAIDOC Week is a very important week in the Indigenous calendar with the week signifying the proud history, culture and achievements of Indigenous Australians.

Shaun Burgoyne & Ben Stratton joined in on the activities and had a fun morning celebrating Indigenous culture.

In 2017 the club travelled to Sydney for Sir Doug Nicholls Indigenous Round.

For this match, Shaun Burgoyne wore the number ‘67’ which marked 50 years since the 1967 referendum which allowed the constitution to be altered and to recognise Indigenous Australians in the Census and to ensure their inclusion in Federal laws.

All match-worn guernseys were auctioned off post-match with all proceeds going to the Indigenous Literacy Foundation which totalled $10,624.80. 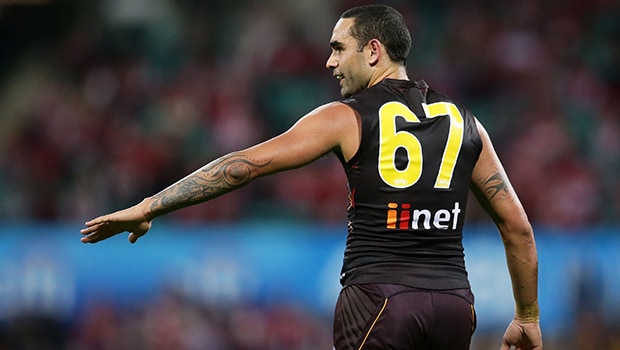 Shaun Burgoyne wearing the number 67 during the Sir Doug Nicholls Indigenous Round to commemorate the 1967 referendum.

Clontarf students met with players at training the day before the Round 10 clash with Sydney.